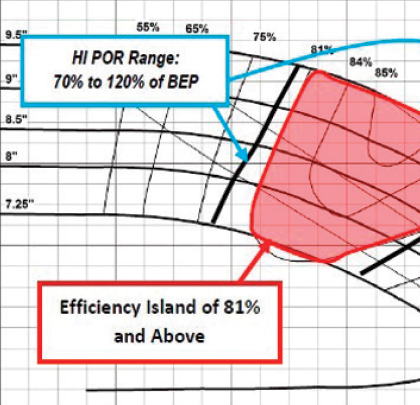 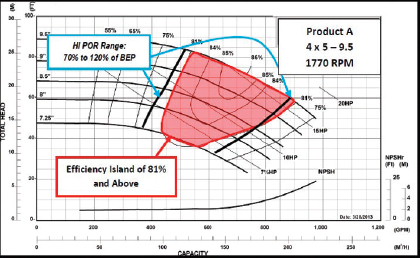 The “Efficiency Island” is shown in red—bounded by the maximum impeller diameter, minimum impeller diameter and the iso-efficiency lines. The goal is to maximize the efficiency island to achieve the greatest range of flow and greatest span of total head. By having a larger island, shifts in the system curve or movements along the pump curve can happen within the same efficiency range. Also illustrated is the ANSI/HI Preferred Operating Range (POR) of 70 percent to 120 percent of BEP, the optimal range for centrifugal pump operation.

In the two-plus years since the Department of Energy issued the Energy Conservation Standards for Pumps, the commercial pump industry has been moving toward January 2020 compliance—updating testing procedures, adding reporting methods and other practical matters.

Some manufacturers, such as Xylem’s Bell & Gossett brand, have already retooled their product lines in anticipation of the DOE rules and are well ahead in completing the steps to certification and compliance. As expected, however, not all manufacturers are taking the same approach to compliance, leading to a lack of understanding in the marketplace as to which pumps are truly the most efficient option.
Manufacturers have a choice between redesigning existing products and discontinuing them. An estimated 25 percent of pumps on the market today will be eliminated by 2020 because they don’t meet DOE minimum efficiency standards. The DOE expects it will cost the industry $81.2 million for product conversion — research, development, testing, marketing — and also capital conversion to update production facilities.

In establishing the DOE Pump Energy Index (PEI), a new metric to rate the performance of pumps, the DOE offered manufacturers methods to determine the index for either constant load or variable load equipment classes. Pumps that meet the standard are assigned a PEI value of 1 or below. PEICL applies to pumps sold without variable speed controls; PEIVL applies to pumps sold with variable speed controls.

While the goal of the DOE’s initiative was to improve the overall efficiency of pumps sold in the U.S. market, it also wanted to encourage the use of variable speed controls in variable load systems to maximize energy savings — thus the reason why it utilizes two PEIs for a pump.

In addition to the two versions of the Pump Energy Index, the DOE also established U.S. Standards for Pump Testing that are based on the Hydraulic Institute’s (HI) 40.6 Pump Efficiency Test Standard. The DOE required changes to this standard, so HI updated the standard (HI 40.6-2016) so it is now aligned with federal law. This pump test standard defines the testing methods to determine the efficiency of a bare pump and allow for the addition of electric motors and variable speed drives based on Nominal Efficiency Tables or actual wire to water testing.

Where PER represents a pump’s power consumption at a weighted average of three or four load points. See the adjacent areas for more information on PER.

Since the PEICL is above 1.0 it would not qualify for DOE minimum compliance.

Since the PEICL is below 1.0 it would qualify for DOE minimum compliance.
The difference between these two pumps calculated for PEICL is approximately a 6-percent energy savings through the redesign.

* The Performance Energy Rating (PERSTD) is an average of the driver input power for a minimal compliant pump. It is calculated based on each pumps hydraulic curves, load points and a standard level C-value that is provided by DOE. This is why the denominator changes in the above equations. These load points are 75%, 100% and 110% of BEP flow for the specific pump corrected to nominal speed of rotation.

**The PERCL is an average of the driver input power of an actual pump. It is calculated based on each pump’s hydraulic curves, load points and actual pump efficiency at those load points. This is why the numerator changes. These load points are 75%, 100% and 110% of BEP flow for the specific pump and motor corrected to nominal speed of rotation.

By including the PEIVL method in the standard, the DOE aimed to encourage VSD use to further improve efficiency of pumping systems. When a VSD is installed properly, pumps can work more efficiently, thereby extending product life, reducing energy consumption and decreasing electrical system stress.

Just as the 80SC and redesigned e-80SC pumps calculated for PEICL realized a 6 percent energy savings, when applying a VSD to the same two pumps and calculating PEIVL, an additional 6-percent increase in energy savings can be achieved as illustrated in the following calculation.

***The PERVL is an average driver input power to VSD control. It is calculated based on each pump’s hydraulic curves, load points and actual pump efficiency at those load points. This is why the numerator changes. These load points start with a 20% of TDH control head and 25%, 50%, 75% and 100% BEP flow equally weighted for the specific pump, motor and VSD corrected to nominal speed of rotation.

The PEIVL calculation, like Bell & Gossett’s Efficiency Islands concept, further demonstrates how a specifying engineer can maximize efficiency in a hydronic system and make informed decisions about using compliant pumps. An Efficiency Island is the area of the pump performance curve where the pump operates as widely and as deeply as possible within the Hydraulic Institute’s Preferred Operating Range (POR).

The “Efficiency Island” is shown in red—bounded by the maximum impeller diameter, minimum impeller diameter and the iso-efficiency lines. The goal is to maximize the efficiency island to achieve the greatest range of flow and greatest span of total head. By having a larger island, shifts in the system curve or movements along the pump curve can happen within the same efficiency range. Also illustrated is the ANSI/HI Preferred Operating Range (POR) of 70 percent to 120 percent of BEP, the optimal range for centrifugal pump operation.

By establishing two methods of pump efficiency indexes, there is some confusion in the industry regarding compliance because the variable load test method can mask the deficiencies of an inefficient PEICL pump when a motor and VSD are added based on “nominal efficiencies.” Even though putting a VSD on an inefficient pump achieves the PEIVL rating — acceptable under the DOE test procedures — the non-compliant pump has not been upgraded for efficiency and would not meet the DOE’s standard for PEICL if tested on its own.

Bell & Gossett engineers have been working with the DOE through the Hydraulic Institute (HI) since 2011 when discussions began about regulating pump efficiency. Supporting measures to reduce energy consumption and making the necessary investment in equipment and technology to meet and exceed compliance. They’ve also developed tools for the industry to support efficient pump selection within the design of complete hydronic HVAC and plumbing systems, such as B&G’s Part Load Efficiency Value (PLEV) calculation.
With an HVAC system accounting for up to 50 percent of a commercial building’s energy use, designing efficient heating and cooling systems is critical to keeping a project on budget as well as meeting sustainability goals. System designers who are diligent in their pursuit of efficiency will want to use all the tools available to them.

In order to ensure hydronic HVAC and plumbing systems are being designed from the start with the most efficient pumps, engineers should look at both PEICL and PEIVL with key emphasis on PEICL to confirm that the pump they are specifying has a rating of 1.0 or less in accordance with DOE standards.

It’s also important to underscore that the DOE standards for pump efficiency are just the starting point—even greater energy efficiencies can be realized if designers continue to seek smarter ways to specify pumps and stay abreast of industry advances.

Conversely, those manufacturers that might consider trading motor and VSD efficiency to avoid investing in pump hydraulic redesigns, could eventually be forced to get their bare pumps alone in compliance. This would achieve the intended result the DOE was mandated to do — improve the energy efficiency of pumps alone.

In the meantime, specifying engineers have the burden of examining the data for proof of efficiency to ensure the intent of the DOE standards is carried out — quite simply, improving pump efficiency, reducing energy consumption for owners and reducing carbon emissions into the environment.