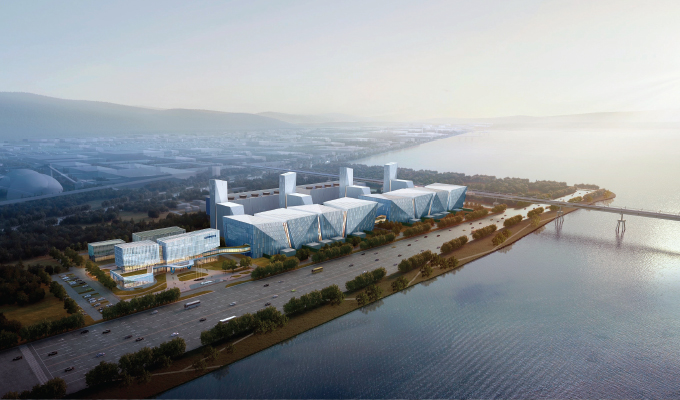 A new power plant is expected to deliver 1.34 gigawatts of electricity to China’s Guangdong province and steam for the industrial process of the chemical complex present in Huizhou, and a powerful partnership from GE and Harbin Electric Corporation will play a vital role. In late 2021, the two companies announced that Chinese state-owned power utility Guangdong Energy Group Co., Ltd. has ordered two GE 9HA.01 gas turbines for its Guangdong Huizhou combined cycle power plant in Guangdong province, in the Greater Bay Area.

Expected to burn up to 10 percent by volume of hydrogen blended with natural gas upon start of operation, the gas turbines will be the first to burn hydrogen blended with natural gas in mainland China. The project is expected to be operational in 2023 providing 1.34 gigawatts of power to the Guangdong province, which is an agglomeration of cities, to strengthen international cooperation and promote lower-carbon, inclusive, coordinated and sustainable development. Harbin Electric Corporation will also provide steam for the industrial process of the chemical complex present in Huizhou. The project marks first GE 9HA.01 gas turbines blending hydrogen in mainland China and first manufactured from GE-Harbin Electric HDGT joint venture in Qinhuangdao

China is committed to the coal-to-gas transition and implementing its policy to reduce coal’s share to under 58 percent of the energy mix. Hydrogen-blended natural gas-fired generators have the lowest CO2 emissions of all fossil power generation fuels—a 10 percent hydrogen-blended natural gas-fired combined cycle plant has roughly 40 percent of the CO2 emissions of a similarly sized coal plant, and lower emissions levels for other pollutants such as mercury, NOx, SOx, and particulate matter.

“GE has long been our preferred partner when transitioning our power plants from coal to natural gas, exceeding our expectations in projects such as our Dongguan Ningzhou power plant” a representative of Guandong Energy Group adds.

“In Guangdong, we focus on meeting the growing electricity and steam needs while reducing carbon emissions, and we are proud our plant will be GE’s first hydrogen-blended natural gas fueled facility in mainland China. This project will be foundational in promoting the use of hydrogen blending in power generation across other provinces.”

“GE sees hydrogen-blended natural gas serving as a catalyst accelerating the world’s efforts towards decarbonizing the power generation sector,” says Ma Jun, utility sales general manager of GE Gas Power China. “We are pleased that Guangdong Energy Group once again has selected our H-Class technology to deliver highly efficient power generation that will emit even less carbon when blended with hydrogen. The units will initially operate on a blend of up to 10 percent hydrogen by volume, with potential for an increase in future.”

A LEGACY OF PROVIDING POWER

GE Gas Power serves over 100 customers’ needs for more than 200 gas turbines in mainland China, with an installed power capacity of 46 gigawatts. Built on 129 years of heritage, industry expertise, and leadership, GE Gas Power is among the first international manufacturer and supplier of gas turbine technology to enter China.

From 2017, GE Gas Power entered this strategic partnership to build a gas turbine manufacturing joint venture in Qinhuangdao. Both of the 9HA.01 gas turbines to be installed in the Guangdong Huizhou combined cycle power plant will be built at the GE-Harbin Electric joint venture in mainland China. GE has long operated with a commitment to a comprehensive localization structure that effectively increases GE’s responsiveness to customer needs and reduces the cost of new units and services.

THE POWER OF MODULARITY

SieGE Gas Power is a world leader in natural gas power technology, services, and solutions. Through relentless innovation and continuous partnership with our customers, we are providing more advanced, cleaner, and efficient power that people depend on today and building the energy technologies of the future. With the world’s largest installed base of gas turbines and more than 670 million operating hours across GE’s installed fleet, we offer advanced technology and a level of experience that’s unmatched in the industry to build, operate, and maintain leading gas power plants. For more information, visit www.ge.com/power/gas.

MODERN PUMPING TODAY, January 2022
Did you enjoy this article?
Subscribe to the FREE Digital Edition of Modern Pumping Today Magazine!