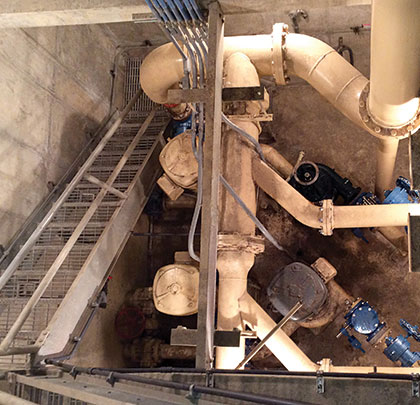 When the Santa Margarita Water District (SMWD) was formed in 1964 by a group of ranchers who wanted a reliable water source for their cattle, the district served more cows than people. Since then, the area has grown to over 150,000 homes and businesses, and the SMWD maintains over 1200 miles (1931 kilometers) of water and sewer lines across a 62,674 acre service area. Keeping up with both the water needs and sewage disposal of the community has come with significant challenges, particularly due to both the increase in influent and change in the makeup and durability of the sewage running through the district’s reclaimed-water facility.
A VALUED WATER SOURCE
Built in 1977, the reclaimed water facility was initially intended to provide water for landscape irrigation in the district. During a typical twelve-month period today, the facility brings in 680 million gallons (2.57 billion liters) of sewage and sends out 620 million gallons (2.34 billion liters) of reclaimed water. Originally, the facility relied on a mechanically-cleaned bar screen to remove debris from the waste system.
Over time, safer, more reliable solutions came on the market, and the bar screen was replaced by a CMD single-drum Channel Monster® from JWC Environmental® that would shred debris before it reached the pumps, preventing clogs or damage. Ron Johnson, facilities supervisor for the SMWD facility, said pump clogging hadn’t been an issue since the Channel Monster was installed—until two years ago, when the composition of the influent became heavily loaded with disposable wipes.
“We have a bank of four VFD controlled pumps at the facility, and typically we run an alternating cycle with two pumps operating and then switching to ensure equal runtime for all the pumps,” Johnson says. “This operating sequence with the pumps modulating around 50 Hertz kept up with plant flow requirements. But starting in about 2012, the pumps would begin to lose efficiency as the wipes loading increased and we would have to run all four pumps to maintain plant production. Once they reached 60 Hertz we would need to shut down the plant to derag the pumps.” 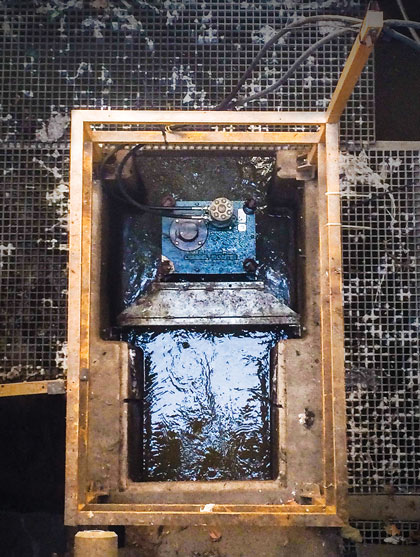 SHUTDOWN COSTS ADD UP
The deragging process started to become necessary every two to six weeks, requiring two operators for about two hours each time to complete the task. “And due to some aging isolation valves that leaked, the plant needed to be entirely shut down during deragging,” Johnson says. These unplanned shutdowns were costing the district an acre-foot of reclaimed water production per month, and the labor costs added up to about $15,000 per year.
Beyond the mounting monetary cost, the safety concerns were equally troubling. “The most efficient method of removing rags is to pull them through the inspection port as one large ball,” Johnson says. “But this procedure, besides being unpleasant, exposes a worker to potential sticks from sharps in the rag balls.”
SEARCHING FOR A SOLUTION
Johnson began looking for a long-term solution to the ragging problem, since both the cost and safety concerns were not sustainable for the district. “We considered changing out the current pumps to a new set of chopper pumps, but this option came with a $100,000 price tag and wasn’t really going to solve the problem,” Johnson says. “We still needed to maintain our inlet Channel Monster to take care of the larger debris the pumps couldn’t handle.
Johnson ultimately decided to upgrade the facility’s Channel Monster to a new perforated metal drum configuration. The coil drums of the original Channel Monster were designed to capture large debris and push it into the grinder’s cutter stack for size reduction. As sewage has evolved and non-dispersible wipes have become a major part of the waste stream, the infrastructure to deal with it has needed to change as well. The perforated drum on the newest generation of Channel Monsters was designed to better capture the wipes and rags that flow through traditional coil drums. “This upgrade cost significantly less than purchasing a whole new set of pumps,” Johnson says. “Plus, this is a solution that will completely eliminate the pump clogging problems we were having for the long term.”
A BRIGHTER FUTURE
Since the new Channel Monster drums were installed, the district has had zero pump-clogging issues at the facility, and has returned to using two pumps at a time instead of all four. Energy costs have decreased $78,000 per year and manual pump deragging has been eliminated. “While the cost savings and the eliminated safety risks are quantifiable, our choice to go with a new Channel Monster, to me, is priceless,” Johnson says. ■
About the Author
Kevin Bates is the global marketing director for JWC Environmental based in Costa Mesa, Californai. JWC Environmental is a world leader in solids reduction and removal for the wastewater industry with its Muffin Monster grinders and Monster screening, compaction and washing systems. Bates has more than twenty years of experience working with global industrial leaders to solve challenging technical problems spanning a wide range of markets including wastewater, construction and mining.