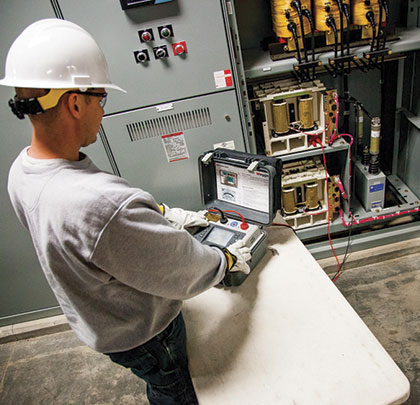 Throughout this series, we have noted the critical need for accurate electrical condition (IR) of the insulation in your equipment and the issues that arise with manual IR testing. In this conclusion, we will dive deep into the advantages of permanently installed automatic (PIA) IR testing equipment and the long-term effects.

IR testing devices have made significant technology developments over the years from the first portable hand-held type models. The latest designed systems now have the ability to be permanently installed in the motor control cabinets or generator switchgear and can perform automatic continuous inline IR testing on the equipment whenever it is de-energized. This allows maintenance personnel to better obtain the true IR leakage current in a more accurate and safer manner. There are several major benefits to this new technology.

First, (PIA) IR testing systems are permanently installed and have the ability to perform a continuous inline IR test while the equipment is offline and isolated from the power source. This provides the means to capture both the real time IR values as well as the overall IR values. The (PIA) IR testers can detect any changes in the IR readings that may occur quickly, as well as those that occur over a longer period of time. This data can then be used to trend and track the electrical condition of the equipment’s insulation thru a DCS or SCADA type of system.

Additionally, (PIA) IR testing systems provide a significant increase in personnel safety because of their automatic “No Hands On “testing and display capabilities. The systems are permanently installed inside the MCC or Switchgear cabinets and they no longer require maintenance personnel to access the inside of the cabinets to perform manual IR testing. The (PIA) IR testers help maximize a company’s NFPA 70E compliance for personnel safety.

Also, the ability of (PIA) IR testers to perform insulation testing over long periods of time makes the test readings temperature independent and so they do not require a temperature correction. This type of overall IR test data is far more informative than the data gathered during a spot type manual IR test. An overall long-term IR test is the only way to capture the true leakage current occurring in the equipment’s insulation.

Furthermore, (PIA) IR testers provide an electronic method of tracking and trending the equipment’s electrical insulation condition, which is important to be able to accurately predict when a failure may occur. This (PIA) IR testing method provides far more consistent test results which helps eliminate false data during testing of the insulation.

(PIA) IR testers also provide the ability to perform a pass/fail test on the equipment before each and every start up, which is the time when most electrical failures do occur. A manual IR test would not be feasible before every start up for obvious reasons. Performing an IR test on the equipment before every start up will help eliminate catastrophic electrical failures that can lead to expensive rewind repairs and unscheduled plant downtime costs.

Equipment Reliability and operating life can now be maximized with the use of these type of IR testers.

THE EFFECTS OF LONG-TERM CONTINUOUS IR TESTING ON ELECTRICAL EQUIPMENT

There are some initial concerns regarding this type of continuous testing and whether or not it could cause harm to the electrical insulation over time. However, over twenty years of research done by an EASA repair facility (PEMCO, Inc.) located in the Gulf States area, has proven that the continued application of a true DC test voltage, used during IR testing, does not cause any harmful and/or cumulative effects on the insulation materials used in electrical equipment. This is mainly due to the fact that (PIA) IR testing devices use a DC voltage which is non-destructive by nature. The DC test voltage has a constant sign wave and not an alternating sign wave like AC voltage does. An alternating AC sign wave produces high voltage spiking on the insulation that eventually causes long term damage to its dielectric strength. And so, it’s the actual AC operating voltage being applied to the equipment, especially when a VFD is used, that does in fact cause cumulative damage to the insulation, whereas the DC test voltage does not.

In 2002, a ten-year study on IR testing was undertaken by the U.S. Army Corps of Engineers located in St. Paul, Minnesota. The results of the study proved that continuous (PIA) IR testing not only enhances the ability to better predict and prevent critical motor failures, but it also improved the electrical condition of the motor’s insulation. It was found during the study that the DC field being applied to the motor insulation during the IR testing causes a dielectric polarizing effect on the insulation’s molecules. This in turn maximizes the insulation material’s dielectric strength and improves the ability to prevent the adverse effects of moisture present in the motors. Motors that were tested and found to have low IR readings were then connected to a (PIA) IR tester. The motors showed a major improvement in their IR readings over a short period of time and then maintained a high IR reading, even while operating in the same harsh environmental conditions that caused the low IR readings. The conclusion was that the constant (PIA) IR testing not only allowed them to better track and trend the operating condition of their critical motors, but it also improved the motor insulation in the process. The (PIA) IR testing thus extended their motor operating life and increased the reliability of their Lock operations.

The DC test voltage levels used in (PIA) IR testing devices is designed to keep well below the dielectric breakdown voltage level of most all insulation materials. This helps to ensure that the continued application of the DC testing voltage will not deteriorate the insulation’s dielectric strength, even over long periods of testing. The (PIA) I/R testers are also current limited to a maximum of approximately 350 micro amps DC during testing, so they will not cause any type of heating on the insulation which could cause long term thermal damage to the insulation. This low current level also prevents damaging the electrical insulation even when the IR readings are very low and protects maintenance personnel should they ever come in contact with the test voltage.

Permanently Installed Automatic IR testing has been shown to be a more accurate and safer method of performing IR testing than manual testing and will not cause any cumulative damage to the equipment being tested, even after long periods of continuous testing. (PIA) IR testing has been used for over thirty years on all types of electrical equipment and has proven to be one of the most beneficial methods in tracking both the leakage and the dielectric absorption current of insulation materials. And since IR testing devices in general are designed to be incapable of damaging the equipment being tested, they are considered to be the safest type of insulation test to be performed on electrical equipment of any age or condition.

(PIA) IR test devices enhance personnel safety with their automatic no-hands-on testing capability that eliminates the need to access control cabinets which could expose personnel to dangerous arc flash conditions and/or electrical injuries that can occur during manual testing. The (PIA) IR testers do not require a highly trained technician to perform the electrical testing like some other types of electrical testing equipment does, such as hi-pot and surge testers. Those type of testing devices do require a highly trained skilled technician to use them properly because they can actually cause damage to the insulation and injure personnel during the testing.

This prevents the types of failures which most commonly occur when idle equipment is started, due to wet, damaged, or compromised electrical insulation. (PIA) IR testing is the only method capable of capturing the hot and cold IR readings of the insulation, which is critical in determining the real-time condition as well as the amount of operating life left in the insulation.

Richard J. Zelm is vice president of engineering at MegAlert, Inc. MegAlert is committed to making the workplace safer and more innovative than ever before. With over three decades of experience in the process control instruments industry, customers count on MegAlert to provide high-quality products and excellent service. For more information, visit www.megalert.com.
____________________________________________
MODERN PUMPING TODAY, October 2017
Did you enjoy this article?
Subscribe to the FREE Digital Edition of Modern Pumping Today Magazine!