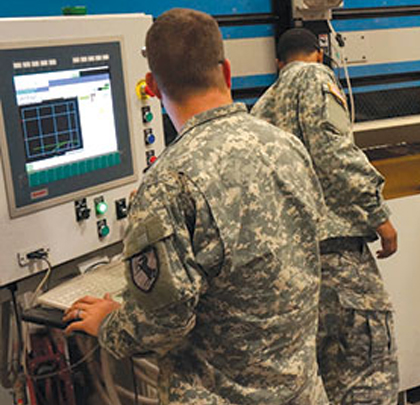 Jet Edge systems are used around the world in a broad range of industries. From the world’s leading airlines to automotive, aerospace, industrial manufacturers to the machine and job shops in small towns. But a recent client stands out from the rest—the U.S. Army’s legendary 11th Armored Calvary Regiment (ACR) has installed a Jet Edge precision water jet cutting system at its home base in Fort Irwin, California. 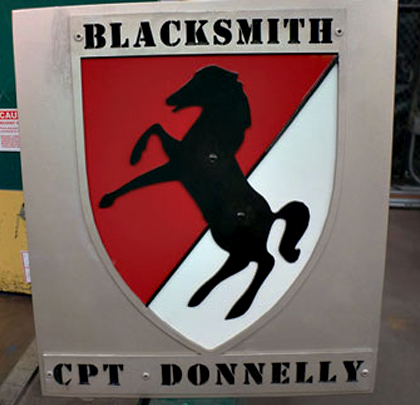 A waterjet cut plaque for departing soldier(s).
BEST OF THE BEST
Known for its tough and uncompromising standards, the 11th ACR, “the Blackhorse Regiment,” is widely respected as the best Opposing Force in the world. The famous regiment, which was honored in Tom Clancy’s novel Executive Orders, is responsible for ensuring that the United States continues to have the best trained military in the world by serving as the opposing force in simulated conflicts at the Army’s National Training Center (NTC) at Fort Irwin.
Since 1901, the 11th Armored Cavalry Regiment has proudly served the nation in times of peace and conflict. The 11th ACR’s unique mission is vital to the readiness of the U.S. Army. Ask the members of the Blackhorse Regiment and they will tell you their number one priority is to ensure we continue to have the best trained military in the world. Training against an uncooperative opponent is critical for today’s military. 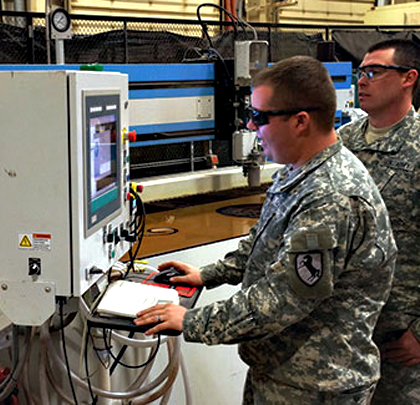 SPC Roberts and PFC Adams are programming and building a part with the SigmaNEST® software.
ALWAYS READY
The 11th ACR’s new Jet Edge Mid Rail Gantry water jet system is operated by the Service and Recovery Section, a support section within the Regiment’s Maintenance Troop, Regimental Support Squadron (RSS). The twenty-soldier section is responsible for machining and welding fabricated parts as well as providing recovery support to the Regiment. In addition to its water jet, the 11th ACR’s shop has CNC milling capability, lathes, and welding machines.
“We decided to purchase this equipment specifically to assist in expediting our work requests,” explains Chief Warrant Officer Two Alphonso L. Ash, Jr., who heads the section. “The decision to incorporate the water jet into our shop operations was based solely on our daily workload as the water jet has helped to expedite our work requests; the water jet also allows our section to fabricate parts that have a long shipping date and/or high cost which has increased our operational readiness.”
The water jet is being used primarily to cut metals ranging from aluminum to armored steel with a thickness from 1/8 to 3 inches (3.18 to 76.2 millimeters), CW2(P) Ash noted. Previously the soldiers had been cutting these by hand with a plasma torch, oxy-acetylene torches, and shear.
“The water jet is unique because parts can be created using the computer-based software (SigmaNEST®) and cut out after the part has been built,” CW2(P) Ash continues. “Also, the part can be handled immediately following the cut without having concern for heat as in the oxy-acetylene or plasma torch.” 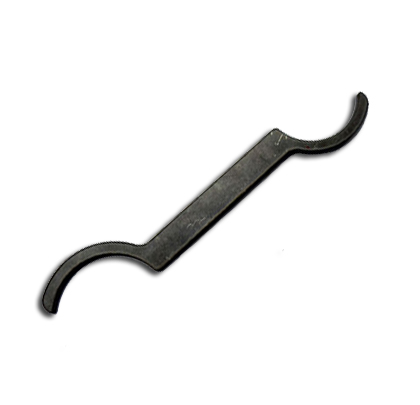 This PVS-15 spanner wrench cut with the Jet Edge Mid Rail Gantry water jet system is ready for use the moment it’s cut.
A JOB WELL DONE
Within the first month of installation, the section had already built numerous parts with its Jet Edge including battery shims, transmission shifting linkages, electrical covers, ornamental fixtures, and spanner wrenches, he notes.
“I have found that this system has been an excellent and valuable asset to our shop as I have recommended this piece of equipment to many of my peers as part of their shop setup,” CW2(P) Ash comments.
Jet Edge president Jude Lague expresses Jet Edge’s great pride in being selected as the 11th ACR’s water jet systems manufacturer. 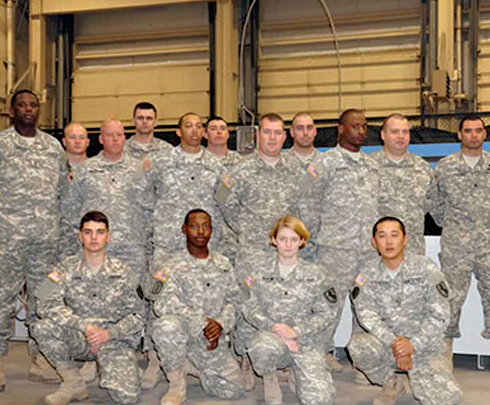