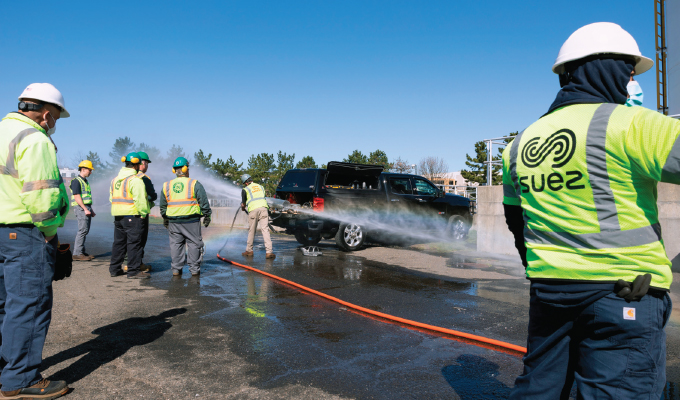 Contractors cleaning municipal sewer, storm, and sanitary lines face a host of challenges on the job. This can range from having to clean miles of line in the most efficient manner, complying with annual regulatory mandates, to handling tough blockages caused by roots, grease, and cave-ins. It can even involve dreaded “blown toilets,” which can become a clean-up and public relations nightmare if this occurs too often.

So, for busy contractors, tried-and-true, practical tips will be provided from experts at an industry innovator: KEG Technologies, manufacturer of sewer and storm lines products including Tier 1 to Tier 3 nozzles, chain cutters, floor cleaners, and camera nozzle systems.

As a national trainer of best-practice techniques, the Spartanburg, South Carolina-based company is a member of NASSCO, the National Association of Sewer Service Companies, and its Tier 3 High Efficiency nozzles, such as the Torpedo, Royal, and OMG, provide up to 98 percent efficiency.

“Most of the problems are in four-inch up to 18-inch sewer pipe, which accounts for up to 95 percent of all the pipe in the ground, anywhere in the United States,” says Dan Story, KEG operations manager. “Proper training and education can resolve the majority of these issues.”

1. TO CLEAN FASTER, SLOW DOWN

The number one mistake of most contractors is simply rushing through the cleaning process, according to Story.

“Most operators run their nozzles way too fast. Slow your nozzle down and let it do its job. You’re not in a race. If you run the nozzle up in a hurry and back in a hurry, all you do is waste water and time,” says Story.

According to Story, when contractors slow down and let the water flow carry the material back to the evacuation point, the water in the pipe becomes like a “conveyor belt that moves the material.”

“If you clean correctly, the water is going to carry the debris off and out of the way,” says Story. “That is why with six to 15-inch lines, 95 percent of the time it is possible to go from manhole to manhole and clean them in one pass. While I’m moving on, most operators who rush are still making second and third passes.”

“As you go in the pipe, if you go in slow enough, you should be running between 40 and 60 feet per minute, based on the condition of the pipe and how much material is in the pipe. The more material, the slower you want to move,” he says.

“You want to be able to chop that material up and get it in the flow of the pipe’s stream. When you get to the end of the line, dial your pressure back down and rinse it. When you come back, the job is done,” he adds.

2. CHOOSE THE RIGHT NOZZLE FOR THE JOB

In addition to going slow, Story emphasizes that choosing the right nozzle for the job is critical.

“By going slow and using the right type of nozzle, you will clean your line in one pass,” says Story.

He points out that in many cases, using a high efficiency Tier 3 nozzle will provide significantly more cleaning force, at a greater distance, with less water. This enables crews to get more line cleaned before having to leave the jobsite to refill the sewer truck with water.

However, even within the Tier 3 category there are significant differences in levels of efficiency. Opting for the lower end Tier 3 nozzle with 75 percent efficiency could still lead to additional trips to refill. Additionally, such units may not remove restrictive sewer buildup or blockage in a timely manner.

“If your objective is to remove debris out of the sewer line, which one’s going to do it better? 98 pounds of force or 13 pounds of force?” asks Story. “Using high-efficiency Tier 3 nozzles are key to getting more done in less time.”

3. SLOW DOWN EVEN MORE TO REMOVE BLOCKAGES

While blockages come in many varieties, including roots, grease, mineral deposits, and cave-ins, it is essential to clean even slower when encountering one, according to Story.

“If the contractor rushes up the sewer line, sooner or later they will run into a blockage of roots, grease, etc. and plug up their front jets. Now, they no longer have a penetrating tool. They have a battering ram, a nozzle with no forward jets trying to feed its way through the blockage,” says Story.

4. AVOID BLOWN TOILETS: SLOW DOWN, AND CLEAN UP AND DOWN THE SEWER LINE

As any contractor knows, a “blown toilet” can leave sewer material on a homeowner’s floor and toilet seat, raising tensions in the community. This occurs when the contractor rushes up the sewer line with little or no cleaning going up the sewer line on the first pass. This results in excessive piles of debris on the return trip through the same stretch of sewer line.

According to Ken Billingham, KEG international product specialist, air flow from the jet nozzle compresses between the nozzle and the debris, creating significant positive pressure. When the debris passes by a home’s service line, the pressurized air blasts up and out of the service line, causing a blown toilet.

The solution, according to Billingham, is to slow down and clean going down the sewer line and back. This can largely prevent the conditions that too often lead to blown toilets.

The same approach can prevent the worst incidents – when rotting black material trapped in sewer pipe sags gets launched into homeowner’s bathrooms. “By cleaning slowly, contractors are able to pull the water and trapped material out of the pipe sags, so they will not blow the worst kind of material out of the toilet,” says Billingham.

When the city of Ottawa in Ontario, Canada had a serious issue with blown toilets, the city council would not allow sewer cleaning crews to go into certain parts of town where there were chronic problems.

After Billingham conducted a three-day training session with the city’s contractors, the local newspaper reported that the training had helped to reduce blown toilets in the city by 88 percent.

5. SET UP AND USE CHAIN CUTTERS CORRECTLY

Chain cutters can be used to remove most types of sewer line blockages. As an example, high output torque cutters such as KEG’s Micro Chain Cutter can readily remove light roots, while its Supernova Chain Cutter is designed to eliminate heavy root blockages as well as scale, mineral deposits, and years of hardened grease. However, these tools must be set up and used correctly.

“Chain cutters are forgiving, but most people are hesitant to use them because if they are set up wrong or run improperly, they can destroy your pipe. If you set it up right, and run it properly, you will never damage a pipe,” says Story.

Story says that contractors must first set up cutters correctly and follow the manufacturer’s guidelines. In general, he advises, it is best to set up the cutter chain to be about one inch smaller than the pipe it will cut (i.e., use a 9-inch cutter chain in a 10-inch pipe, etc.)

As for operating the cutter, he says, “Let the tool find its way down. You will know when it’s in contact with roots. You can feel it. You can smell it. You can hear the change in the way that the tool works. Just keep feeding it in slow and steady until it gets through the problem.”

6. USE A CAMERA NOZZLE TO QUICKLY DETERMINE THE PROBLEM OR VERIFY COMPLIANCE

When contractors need to quickly assess the condition of a sewer line to determine a solution or document its condition to verify mandated compliance, today nozzles with integrated cameras can accomplish both during routine cleaning.

“A small municipality could use a camera-nozzle to inspect their own pipes to verify they are clean instead of contracting it out. If they found any major problems, they could bring their contractor in,” says Ken Billingham.

“When the operator is having problems trying to get through a pipe, a camera-nozzle can take a quick look at it, so they can pick the right tool, whether it is a cutter, blockage nozzle, or digging crew,” he adds.

For example, KEG’s camera-nozzle, called KleenSight, offers operators the ability to clean sewer and storm lines while recording video, as well as quickly assess the line without having to use a CCTV camera truck. Only a jetter hose connection is required—no cables or wires. With wi-fi capability, the camera captures the video in memory and allows viewing and downloads on any Wi-Fi enabled device, such as a smartphone, laptop, and so on.

Story adds an important word of caution: “Anytime you put a root cutter in any kind of pipe, the line should always be inspected with a camera first, and a camera nozzle makes this easy. Also, all cutting should be done with a camera to help the contractor know what he or she is doing. This is critical because with all the varied utilities in the ground, if you’re not inspecting the pipe, you’re liable to hit electric lines, gas lines, or fiber optic lines—and that can cause explosions or serious outages.”

Most municipal contractors do not have the time to keep up-to-date with the industry’s best practices and equipment. That can lead to costly errors and even safety hazards. For those who want to enhance the safety and productivity of their workforce, scheduling periodic or ongoing training can resolve serious issues and turn problems into strengths, as training did with the city of Ottawa.

“Whether contractors take advantage of online or in-person classes, or get hands-on instruction, guidance, and practice right in their own communities, learning best-practice techniques usually pays off quickly in improved service quality and production,” concludes Story.

MODERN PUMPING TODAY, September 2021
Did you enjoy this article?
Subscribe to the FREE Digital Edition of Modern Pumping Today Magazine!