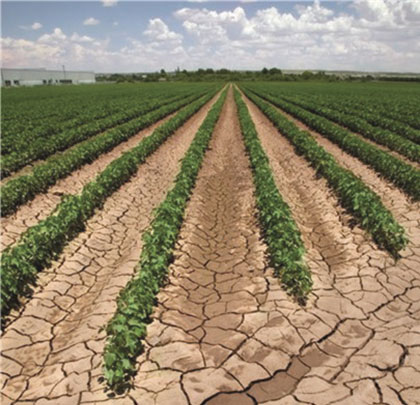 A prolonged and serious drought in the American West has elevated concerns about the state of our nation’s water use and supply. The United States has a large supply of water overall, but it often is not found where it is needed, when it is needed, or in a useable form. The challenge of water scarcity has both economic and political ramifications. U.S. businesses report substantial concerns over water supply. Water shortages have already strained relationships between states and among their water users: more than thirty-five states have had conflicts with neighboring states over water.
For affected local economies, especially those reliant on agriculture, drought is disastrous; scarce water can threaten the viability of agricultural production. In California alone, the drought is expected to cost 17,100 seasonal and part-time jobs in 2014. In January of this year California’s governor declared a state of emergency, and the state identified and offered support to seventeen water systems expected to face severe water shortages in the subsequent sixty to one hundred days. Furthermore, in response to rapidly dwindling groundwater reserves, California lawmakers passed historic legislation in September that will regulate, for the first time in the state’s history, the pumping of water from underground water sources. Water is vital to many national industries besides agriculture, serving as a critical input to a range of sectors in the economy, including energy, information technology, and even retail. The water crisis is as much an economic issue as it is an environmental one, and demands focused national attention. 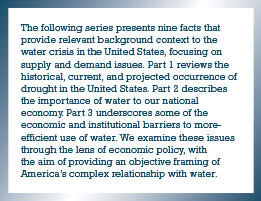 DEMAND OUTPACING SUPPLY: AN INTRODUCTION
Water supply, including surface water found in streams, rivers, lakes, or reservoirs, as well as groundwater stored in underground aquifers, remains mostly dependent on climate patterns. In certain regions—in particular the Colorado River Basin, which supplies much of the West’s water—demand has outpaced the average supply of water. Innovative solutions—such as the processes of reclaiming and desalinating water to turn low-quality water into freshwater suitable for human consumption or irrigation—account for only a minor share of America’s water supply. Moreover, water supply is further challenged by increased climate variability, which directly impacts the reliability of water supply and calls into question the adequacy of our nation’s water infrastructure, much of which was designed to accommodate climatic projections that are increasingly obsolete.
The demand for water is complex and varied, as water is used for an array of purposes, in very different ways. Much of the total withdrawn water—water diverted from a source, such as an aquifer, river, or ocean—is immediately returned to the source after the intended use or is reused for the same purpose, especially when it is used for cooling (e.g., in the technology industry or for power generation). A substantial fraction of withdrawn water, including a large share of water used for agriculture, is consumed— evaporated, incorporated into crops, used as drinking water, or otherwise removed from the source. 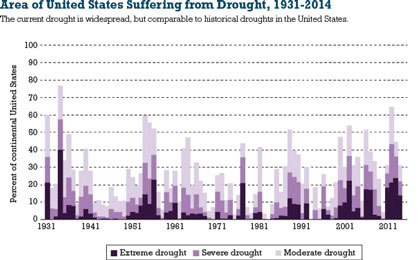 Figure 1: The area of the United States suffering from drought is based on area-weighted Palmer Hydrological Drought Index values for 344 climate divisions in the lower forty-eight states. Sources: National Climatic Data Center n.d.a; authors’ calculations.
Demand for water throughout the United States is high. In fact, the United States is one of the largest withdrawers of water per capita in the world. The nation’s high reliance on water is due in part to a substantial agricultural sector, and in part to the United States’ extensive use of thermoelectric power, which withdraws a significant amount of water (although many of these plants recirculate the water for repeated use). In addition, our per capita rates of domestic use—how much water each person uses at home—are comparatively high. For example, U.S. domestic water use is ninety-eight gallons per person per day, compared to thirty-seven gallons in the United Kingdom and about thirty-two gallons in Germany. Fortunately, water conservation measures in recent years have led to continued declines in per capita domestic water use.
Many of our country’s traditional supply-related solutions (e.g., building dams and reservoirs, diverting rivers, and drilling wells that pump groundwater from aquifers) are no longer viable, sustainable, or affordable, especially given the magnitude of the challenge. Reallocation of water could potentially play a crucial role in addressing the crisis, but many long-standing legal doctrines and institutional norms have severely hindered the trading of water. Water pricing tends not to be based on the cost of providing water; some observers contend that the low cost of water not only has led to elevated levels of demand, but also has hindered both conservation and investment in new technologies and infrastructure. While investment and innovation in the energy sector have soared in recent years, investments in new technology for water markets have stagnated just above zero. In sum, many of the economic mechanisms that are typically used to allocate a scarce resource—such as trading, pricing, and investment in more efficient technology—are absent from our nation’s water markets.
A founding principle of The Hamilton Project’s economic strategy is that long-term prosperity is best achieved by fostering sustainable economic growth. One way to promote this goal is through efficient use of our nation’s resources. Achieving pragmatic regulations that encourage more-efficient use of our nation’s water, combined with robust incentives for innovation, can better position our nation’s economy to handle the demands of the growing imbalance between water supply and demand. Effective, market-based solutions to the national water crisis can ultimately benefit consumers, farmers, water-dependent industries, and taxpayers. In this spirit, we offer “In Times of Drought: Nine Economic Facts about Water in the United States” to bring attention to recent trends in our nation’s supply of and demand for water, and to highlight the importance of an efficient allocation of water resources for economic growth. 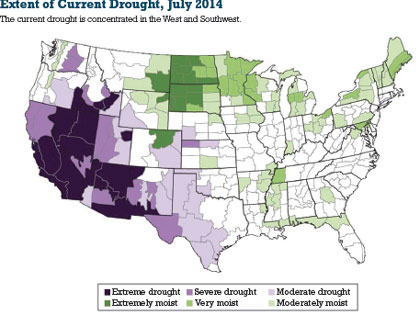 Figure 2:The graph is a reproduction of the Palmer Hydrological Drought Index monthly snapshot, for July 2014, produced by the National Climatic Data Center of the National Oceanic and Atmospheric Administration. The delineated areas correspond to the climate divisions defined by the National Climatic Data Center of the National Oceanic and Atmospheric Administration.  Source: National Climatic Data Center n.d.c.
FACT 1: THE UNITED STATES IS EXPERIENCING SERIOUS, BUT NOT UNPRECEDENTED, DROUGHT CONDITIONS
Much of the country is currently facing considerable drought conditions, with as much as 57 percent of the continental United States experiencing abnormally dry or drought conditions in 2014. Widespread droughts occur regularly in the United States, however. As illustrated in figure 1, droughts covering 40 percent or more of the country have occurred at least once in eight of the past nine decades, with some decades experiencing more than one such drought. Despite California’s exceptional drought conditions, the current drought is well within the historical range of episodic droughts. The Dust Bowl drought, which struck the country in several waves during the 1930s, covered more than 70 percent of the country at its peak in 1934. Other notable droughts include the drought of the 1950s, the drought of 1987–89, and the drought of 2012.
Despite the periodic occurrence of droughts, U.S. water infrastructure remains unprepared to accommodate prolonged and widespread drought conditions. Reservoirs in California have fallen to just 59 percent of their historical averages, as more than 80 percent of the state suffers from extreme or exceptional drought. Elsewhere in the American West the persistently dry conditions have brought the principal reservoirs of the Colorado River Basin—Lake Mead and Lake Powell—to some of their lowest historical levels. 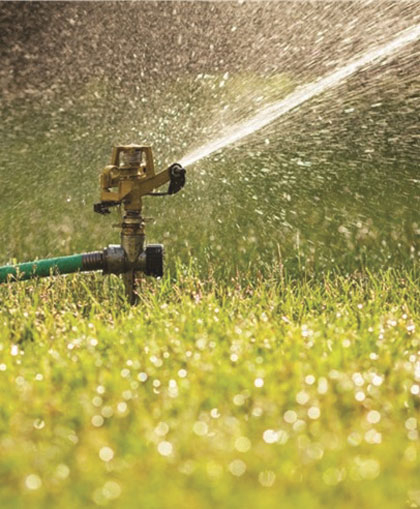 FACT 2: MANY OF AMERICA’S WESTERN STATES ARE CONSISTENTLY VULNERABLE TO DROUGHT
The current drought is concentrated in the arid American West, specifically in Arizona, California, and Nevada, as illustrated in figure 2. Parts of Idaho, New Mexico, Oregon, Texas, Utah, and Washington are also suffering from the current drought.
Historically, Western states have faced the greatest variability in precipitation and temperature, and thus the greatest vulnerability to drought. Furthermore, these variations are expected to increase in the coming decades. Using a model that accounts for climate change, water withdrawals for economic activity, population growth, and efficiency improvements, the U.S. Department of Agriculture (USDA) projects that the larger Southwest—which includes most of the areas currently experiencing drought—will face significant water shortages in the future, and will face substantial hurdles to balancing water supply with demand.
States often experience adverse economic effects during prolonged droughts. In California the current drought has hindered agricultural activity, and is expected to cost the sector approximately $2.2 billion in economic losses in 2014, a substantial share of California’s approximately $25 billion farming sector. The energy sector—including oil and gas production and hydroelectric power generation—is also vulnerable to drought. In California, the drought in 2012 contributed in part to a more than one third reduction in the state’s hydroelectric-power generation relative to the previous year. Droughts can also hinder other water-dependent sectors, such as tourism and recreational fishing. In addition, adverse impacts can be borne by governments in the form of disaster payments and lower tax revenue, and by consumers in the form of higher food and energy prices. 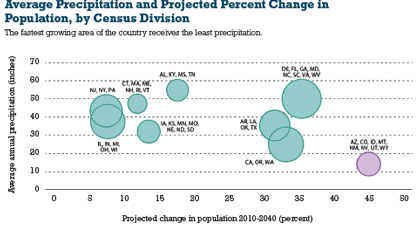 Figure 3: Circle sizes are proportional to the population in each division in 2010. Alaska and Hawaii are excluded from the analysis. The population growth for each division as well as the average annual precipitation for each division are weighted averages using the 2010 Census population of each division. For more details, see the technical appendix. Sources: National Oceanic and Atmospheric Administration n.d.; U.S. Census Bureau 2012, n.d.; Weldon Cooper Center for Public Service 2012; authors’ calculations.
FACT 3: POPULATION GROWTH IS HIGHEST IN AMERICA’S DRIEST STATES
More Americans will likely live in drought conditions as the population increasingly shifts to Western states, which receive limited precipitation and are more vulnerable to drought. (Precipitation—mainly rain, sleet, snow, and hail—is a major source of water.) Five of the ten fastest-growing states between 2000 and 2010 each receive, on average, less than twenty inches of precipitation per year, as compared to a national average over the twentieth century of thirty inches. Nevada and Arizona—which grew at rates of 35 percent and 25 percent, respectively—each receive an average of less than fifteen inches of annual precipitation.
This trend is projected to continue. The driest region of the country—the Census Bureau’s Mountain division, comprising Arizona, Colorado, Idaho, Montana, Nevada, New Mexico, Utah, and Wyoming—is expected to grow by approximately 45 percent between 2010 and 2040 (see figure 3). The second-driest region— California, Oregon, and Washington, in the Pacific division—is also projected to grow substantially, by 33 percent. Although high rates of population growth are also expected to occur in wetter, Southeastern states, such as Florida and Georgia, the share of the U.S. population living in states that receive less than thirty inches of average annual precipitation is expected to rise from less than 31 percent in 2000 to more than 35 percent in 2040.
These population shifts suggest that Americans will increasingly live in the driest areas of the country. And since population growth affects demand for water, the population shift toward drier states will exacerbate water-related challenges and put a strain on existing water infrastructure if the growth is not met with progressively greater conservation efforts. 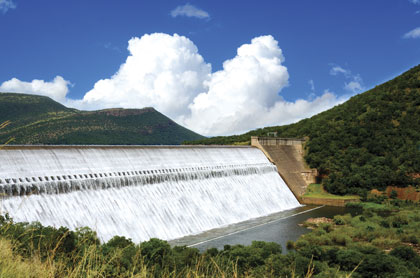