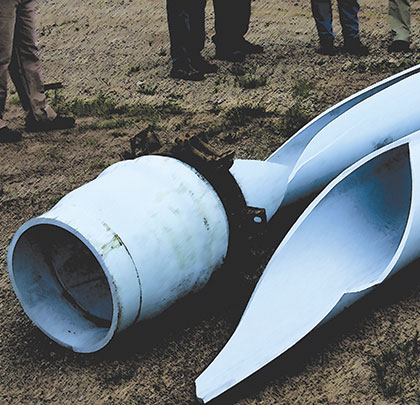 You may have heard the term, “wastewater flows downhill.” In this article, we will refer to this as gravity flow. In many cases, municipal wastewater systems have to pump the fluid uphill first. This presents many issues with regard to minimum flow velocities and pressure surge issues. This article describes the typical sewage pump station force main problems that can arise after startup. 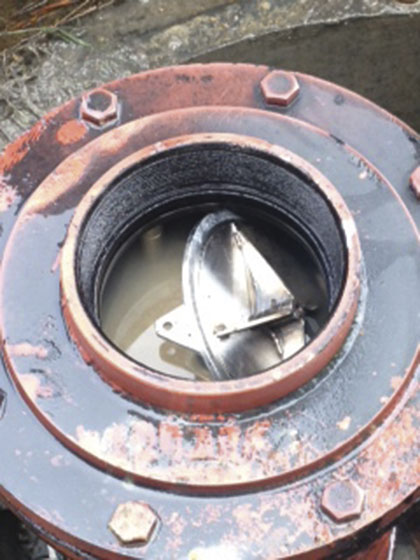 Featured Image: The contractor exposed the pipeline to find that the pipe had failed.
Above: Investigation to see if the new 6-inch sewage air/vacuum valve was destroyed.
PROJECT OVERVIEW
The submersible dry-pit angle flow solids-handling pumps used for this particular application were sized to move 1,750 gallons per minute at 100 feet of head in a 20 inch, 10,000 feet long force main. The pump station elevation was 315 feet and the discharge was 369 feet. The system was designed with four 2-inch air/vacuum release valves. The force main was pressure tested and passed the specified requirements.
Shortly after commissioning, residents living close to where the force main discharged, began to complain of extremely harsh odor. Later, we found that the odor was amplified because the sewage was subject to a full vacuum and gases were released when the force main discharge into a gravity sewer pipeline.
After a heavy rain storm, a major leak in the force main was discovered. Unfortunately for one of the residents, their swimming pool was filled with a river of wastewater. The contractor exposed the pipeline to find that the pipe had failed. 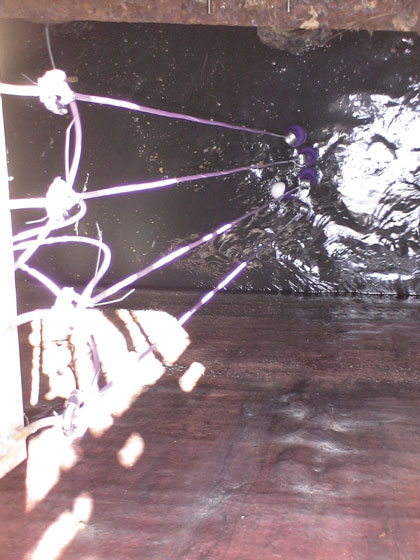 Optifloats installed in wet well.
MAKING THE REPAIRS
Repairs were made to the force main. The assumption was made that they had water hammer issues. The municipality installed a relief valve at the pump station to relieve high pressures that may have occurred during maximum flow during the rain event. A 4-inch sewage pressure relief valve was installed, and the pump station was put back into service.
The set point on the pressure relief valve was set at 30 psi. This was determined by looking at the steady state pressure of the pump discharge pressure, which was 20 psi. The pump was started and stopped, and the operator could hear flow through the pressure relief valve. The municipality and contractor concluded that the high-pressure problem had been solved.
The next day the mayor received a call from the same residents who were complaining of harsh odors. The mayor, director of public works and two operators met with residents at the manhole cover where the force main feeds into the gravity sewer.
They opened the main way cover to see if maybe a dead animal could have been lodged into the piping system. As they were looking down into the manhole, a surge of water shot upward, soaking the four individuals. The flow stopped abruptly. Seconds later, water shot out of the manhole again and the manhole cover was put back in place. 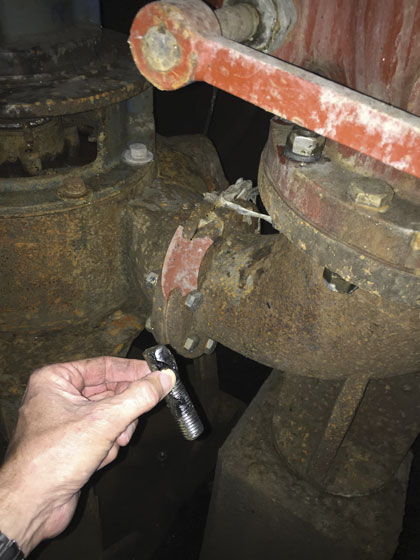 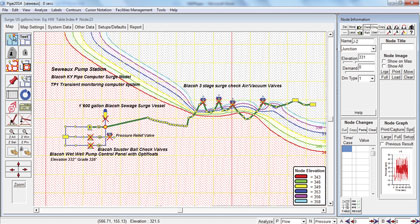 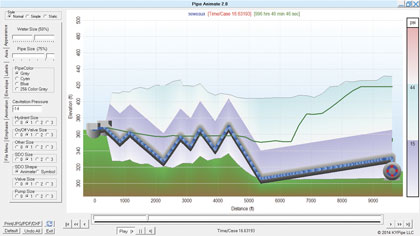 Through Blacoh Surge Control’s computer surge analyses, the proper installation of surge control devices and transient monitoring equipment that records 100 times per second to document operations and design performance all material, these transient issues can be quickly solved. KY Pipe Surge Software allows analysis of every part of your pumping and piping system. 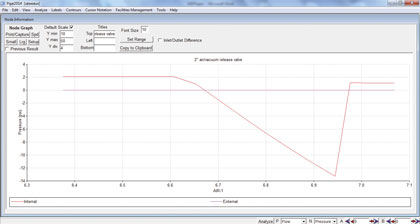 Modeling resulted when the municipality added the 4-inch pressure relief valve. The valve opened, only allowing a small amount of flow. It is concluded that there is no high pressure issue. Negative pressures were causing damage to the piping system. 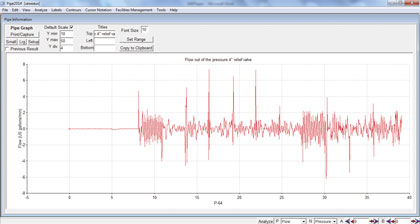 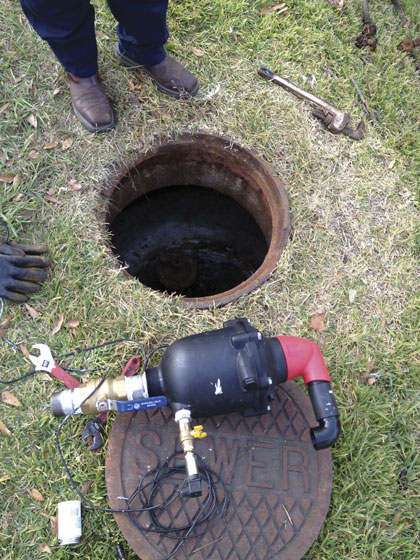 The field evaluation of the sewage force main determined it was necessary to install a transient monitoring system on the air/vacuum release valve.
CHECK VALVE LEAKAGE DISCOVERED
The next day when the operator returned to the pump station, he noticed the check valves on the pumps were leaking through the bearing. The operator could hear reversal of flow through the valve. The check valve had an outside level and weight.
The operator forced the check valve lever arm open to clear debris that could be stuck in the check valve. Then he turned on the pump by “hand” on the selector switch on the pump control panel, ran the pump for a couple minutes, then turned off the pump. The check valve slammed shut, rattling the piping inside the pump station.
The operator thought that if he added more weight to the arm it might help to force it to close more quickly. His old barbells mounted nicely to the check valve arm. He turned on and off the pump, the check valve slammed shut and rattled the piping inside the pump station. The next day the operator removed all the weight and added a spring to the level arm.
The next day, while in the pump station, the operator noticed that the pumps were running and had been running for some time. Normally, the station would run for about six minutes, then shut off. He checked the float switches in the wet well and found the mercury explosion-proof float switch had failed due to wire fatigue. Finally, something broke the he knew he could fix! 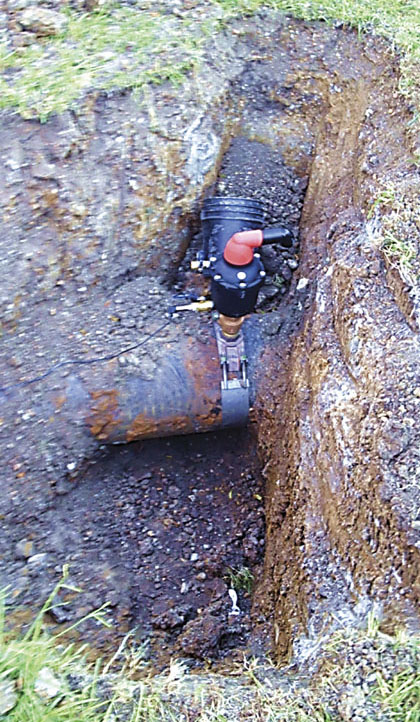 The 6-inch sewage air/vaccum replacement valve was put into service. Through transient monitoring data and computer surge analysis, it was determined that the valve was over sized, reacted to slow to the negative pressure wave, and discharged wastewater into the environment. 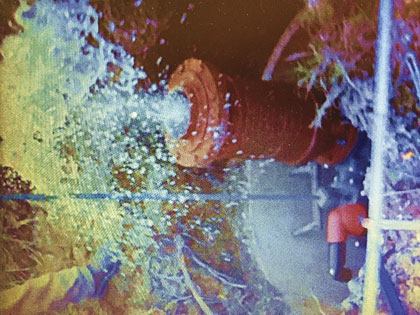 Installing a Blacoh TP3 transient monitoring system will allow evaluation of the pumping operation, check valve closing time, surge vessel operation and the functionality of all surge control devices. If the air/vacuum valves are not functioning, the transient monitoring system will relay an alarm. During a transient pressure event, the transient monitoring system records pressures at 100 times per second.
INSTALLING OPTIFLOAT RELAYS
He installed the new Optifloat relays inside the pump control panel. Instead of wires going to the float, the Optifloat uses a fiber optic cable that transmits a beam of light from an LED in a remote transceiver down to the float, where the beam makes and breaks depending on the tilt of the float.
The transceiver detects the presence or absence of light. It activates a relay in the transceiver, which turns on and off the pumps. Since the float does not have any electrical parts or wires, it cannot under any condition produce arcs or sparks and cannot cause an explosion, therefore making it inherently safe. Operators put the pump station back into service.
The pump turned off, the check valve slammed shut, rattling the piping inside the pump station and sewage started spraying. The bolts between the pump and the outlet 90 sheared off. The megalug bolts sheared on the piping and the pump station was shut down. 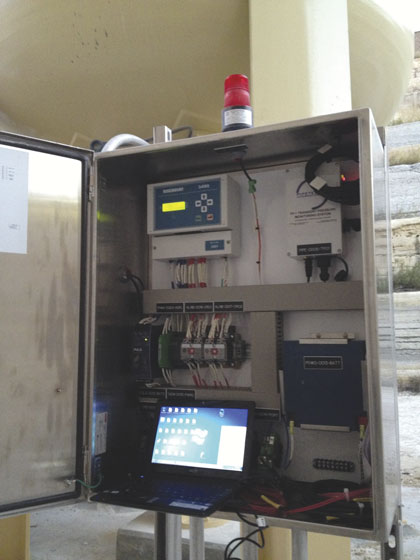 In conclusion of the computer surge model, a 1,600-gallon Blacoh Sewage Surge Vessel was installed which kept the force main pressure at atmosphere during a pump trip. 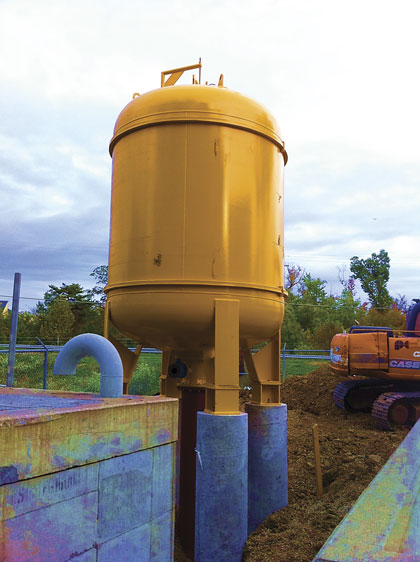 1,600 gallon Blacoh Bladder Type Sewage Surge Vessel designed to give energy to the change in velocity caused by the pump trip.
CONCLUSION
The computer surge analyses without surge control devices properly designed into the system could be devastating to your system. At Blacoh Surge Control, we do not allow a ductile iron force main to drop below -6 psi, and do not allow a PVC pipeline to drop below -2 psi. If the pressure drops below this pressure, we design a system with a sewage surge vessel to give energy to minimize vacuum conditions.
To avoid odor issues and pipeline corrosion, try to design the system so that negative pressure waves do not drop below atmospheric pressure.
Assume that while designing a sewage force main, the air/vacuum valves may become clogged and stop working. Develop a maintenance plan to check the operation of the air/vacuum valves. Install air/vacuum/pressure air release valves to allow trapped air to exit the pipeline to maximize pump efficiency.
If the air/vacuum valve slams shut on the return pressure wave Blacoh Surge Control can model a three-stage air vacuum valve with adjustable switch time and second orifice size. The valve will then be field adjusted and calibrated with transient monitoring equipment.
In vertical discharge piping from the pump, install a 90-degree Szuster Angle Ball Check Valve to increase closing time and reduce the chances of debris causing the check valve to malfunction. Perform a computer surge model using KY Pipe Surge software. The software will aid in the design of the surge control devices. In the system described in this article, we installed 2-inch air/vacuum valves.
The field evaluation of the sewage force main determined it was necessary to install a transient monitoring system on the air/vacuum release valve. This will determine the opening time of the air/vacuum valve and assure that it is sized properly. This field data will be compared to the computer surge analysis. ◆
Frank Knowles Smith III leads the Blacoh Surge Control team as the executive vice president. Smith is a well-respected trailblazer in fluid dynamics with 28 years of academic, design and application experience. The foremost expert on surge control, Smith’s specialties include pump station/pipeline design and computer modeling, piping components, instrumentation, and electrical control panel design. His unique expertise and personalized engineering services are unparalleled in the industry. He can be reached at frank@blacoh.com or 951.342.3100. For more information, visit www.blacoh.com. 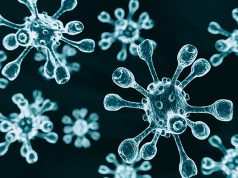